With just one point from their opening two games and no goal scored after 180 minutes of football in the 2020/2021 season, Akwa United are poised to claim their first three points of the season when they take on Eastern neighbours Abia Warriors in Uyo on Saturday.

The match, originally fixed for Sunday January 10 will be the first fixture of match-day 3 after it was brought forward to Saturday 9 January by the league organisers LMC.

The Promise Keepers were held to a goalless draw at home by Dakkada FC on the opening day before losing 1-0 to Enugu Rangers last time out. And coach Boboye’s men have resolved to go all out for their first win this Saturday.

Coach Kennedy Boboye and top striker Ndifreke Effiong will be facing their former club with the aim of grabbing the maximum points against Abia Warriors who have lost their opening two games and are yet to score a goal this season.

Captain of Akwa United Otobong Effiong has tasked his teammates to be more committed and determined to ensure the team record success in all her matches.

Effiong, in a meeting with his teammates after training on Tuesday evening at the practice pitch of the Godswill Akpabio international stadium, charged his colleagues to ensure they hit the ground running when they square up against Abia Warriors.

In the previous 10 meetings between the two sides, Akwa United have won two, Abia Warriors two, while six of those clashes ended in stalemate.

The match is scheduled to kick off by 4pm and victory will move Akwa United to four points from three matches and from 17 position into the top half of the NPFL table. 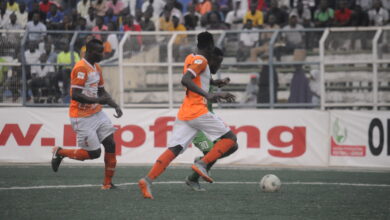 AKWA UTD SET TO BOUNCE BACK AGAINST GO ROUND