Ubong Friday scored an 80th minute penalty against Gombe United on match-day 3 of the 2021/2022 Nigeria Professional Football League season and helped his team record their second win of the new season as they end the year 2021 undefeated at the Nest of Champions.

The defending Champions began the defense of their crown with a comprehensive 3-0 victory over Kano Pillars on match-day 1 before being held to a 1-1 draw by Shooting Stars on match-day 2.

They bounced back to winning ways on Wednesday, recording a narrow win over a stubborn Gombe United side, a victory which was their sixth over their northern opponents in eleven meetings in the top flight. 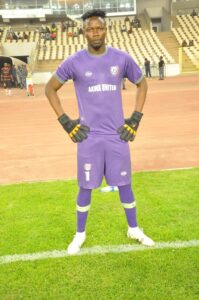 Captain of Akwa United, Ubong Friday had his team’s best chances to score but failed twice to direct his efforts at goal. The visitors had more better opportunities to open scoring but they were kept at bay by some breathtaking saves from goalkeeper Adewale Adeyinka and some superb defending by a well coordinated defense line marshalled by Denis Nya, Charles Okafor, Etboy Akpan and James Ajako.

Coach Boboye made a tactical switch shortly before half-time, replacing midfielder Dare Ojo with striker Izu Azuka, but the home side couldn’t get the breakthrough at the end of the first-half

The Promise Keepers stepped up their game in the second stanza and pushed their visitors back but couldn’t find a way past Itodo Akor in Gombe United’s goal.

In a like-for-like switch, David Onovo was introduced to add more force to the front line. He replaced Ezekiel Bassey in the 69th minute.

The breakthrough however came with ten minutes left to play when Innocent Christian handled Utibe Archibong’s header from Etboy Akpan’s long throw-in inside the box.

The referee spotted the incident and rightly awarded a penalty to Akwa United in which Captain Ubong Friday scored. It’s was the Captain’s second goal of the season.

Coach Boboye made a tactical substitution towards the end of the game, introducing Sampson Gbadebo and John Lazarus in place of Etboy Akpan and Utibe Archibong, the duo did well, complimenting the efforts of their colleagues to protect their lead and closed out the game with a win.

The victory means Akwa United have 7 points from three games, same as Remo Stars who are top of the log but with superior goal difference.

The Promise Keepers will next embark on a trip to Lafia for a match-day 4 clash with Nasarawa United.