WE HAVE TO BE RUTHLESS IN FRONT OF GOAL – BOBOYE

With just two goals in their last five league matches, coach of the reigning Nigeria Professional Football League Champions Kennedy Boboye has tasked his players to be more prolific in front of goal to ensure they get the desired result on Sunday when they engage 19th placed Heartland FC of Owerri on match-day 12 in Uyo.

Speaking exclusively with the club’s official website www.akwaunitedfc.com coach Boboye said the coaching crew is impressed with the player’s goal scoring ratio in training and added that he expect to see them replicate that scoring form in real match situations starting with this weekend’s game against Heartland. 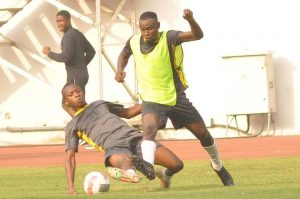 “We at the technical crew have taken a good time to review our performances in the last eleven matches and one thing we have observed is that we are struggling to score goals and that has shown in the results of our matches. It’s unbelievable that we have scored only nine goals in eleven matches, and that is not good enough for us as a team considering our ambition this season.

“I’m happy that we observed this lapses early enough and I can say that we have really worked on that and there have been lots of improvement in our scoring drills in training sessions we have had this week.

“We are building a team that any of the selected eleven players on the pitch can score for us. I’m satisfied with what we have done in terms of scoring and I’m optimistic that my boys will go into the game against Heartland with the same scoring mentality they exhibited in training this week. All what they need to do is to be more aggressive infront of goal. We have to ensure we convert our chances just the way we did during training sessions,” Boboye explained.

The reigning Champions are 7th on the log with 16 points from eleven matches. They have scored nine goals and conceded six. Their last two home games ended in draws – goalless against Sunshine Stars and a 1-1 draw with Kwara United.

Heartland have lost all five of their away games this season and have managed just one goal. After eleven rounds of matches, Heartland have picked up eight points comprising two wins and two draws, and suffered seven defeats. They have scored seven goals and let in 22, the most by any team in the league thus far.

In the previous ten encounters between Akwa United and Heartland, the Promise Keepers have enjoyed seven victories while the Owerri based side had three wins. No draw has been recorded in their last ten meetings in the NPFL.

The match will kick off at four O’clock in the afternoon (4pm) at the Godswill Akpabio International Stadium, Nest of Champions in Uyo.