Following his emergence as Nigeria Professional Football League Best Coach in the Month of April, head coach of Akwa United Ayodeji Ayeni has dedicated his first managerial Award to God for His grace upon his career.

Coach Ayeni made the declaration shortly after receiving the League Bloggers Award LBA at the training pitch of the Godswill Akpabio International Stadium after his team’s Monday evening training session. 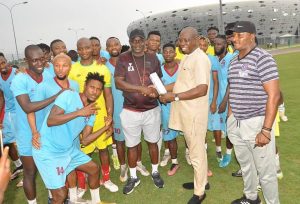 Chairman of the club Elder Paul Bassey who presented the Award to coach Ayeni on behalf of the organisers, League Bloggers Award LBA, congratulated coach Ayeni and encouraged him to do more.

“We at Akwa United are grateful that you have won this Award in your first month in our dear club. We truly believe that you deserve this Award because of what we achieved as a club in the month of April.

“As much as we celebrate this achievement, we want to encourage you to see it as a challenge going forward. We wish you well and more successes as coach of Akwa United” the chairman prayed.

Coach Ayeni won the Award ahead of Rivers United coach Stanley Eguma, and Gombe United’s Aliyu Zubairu as coach of the Month of April which was his first month in-charge of Akwa United following his arrival from Sunshine Stars in mid-season.

In his reaction coach Ayeni expressed appreciation to God for his benevolence and also commended the efforts of his players which he said was instrumental to the team’s performance in April.

“First and foremost I give God all the glory for his blessings upon my career as a coach. It wouldn’t have been possible without his grace and mercies.

“I want to express my sincere gratitude to the management of Akwa United Football Club led by Elder Paul Bassey for giving me this opportunity to work as a coach in this wonderful club. In a very special way I want to commend my players for their commitment and dedication. Their solid performance helped us to go unbeaten in my first six games in-charge.

“Let me also use this opportunity to say a special thank you to my family for all the encouragement I have received. The support of my wife and kids has been massive and I don’t take it for granted.

“When I arrived at this club in mid-season, I knew I was at the right place and I’m particularly happy because this is my first individual Award as a coach in the NPFL.

“I want to dedicated this Award to God Almighty without whom no man can do anything. I also dedicate this Award to the Akwa United family, all the fans of the club and my immediate family. It’s my belief that this is the beginning of good things to come”. 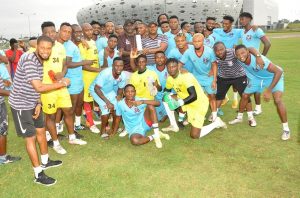 The League Bloggers Award which was instituted in 2009 is known for recognizing and celebrating one outstanding player and a coach in the NPFL every month.