WE WERE WASTEFUL AGAINST MFM – COACH AYENI

Akwa United head Coach Ayodeji Ayeni says he is disappointed that his team dropped two points at home against MFM, stressing that his players were wasteful in front of goal.

Relegation threatened side MFM forced title holders Akwa United to a goalless draw on match-day 31 at the Godswill Akpabio International Stadium in Uyo on Wednesday, meaning both teams played a goalless draw home and away this season following a similar scoreline in Lagos in the first round. 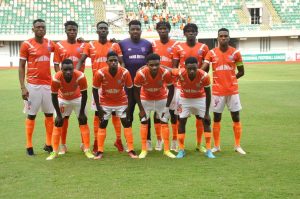 The Promise Keepers needed victory against the Lagos based side to increase their chances of securing continental football next season but were frustrated by MFM who are struggling to avoid relegation.

Speaking with sports journalists after the game coach Ayodeji Ayeni expressed dissatisfaction that his team couldn’t convert their chances.

“It’s disappointing that we played the way we did and created many scoring opportunities but simply could not score. It was a match we should have scored at least three goals in the first half but my boys were wasteful in front of goal. It’s unbelievable that we didn’t pick all three points in this game.

“We are getting into the critical stage in the league and every match is very important. It’s sad that we didn’t win today but having drop points at home means that we can pick points away from home. That is the beauty of league football.

“I don’t want to contest anything with anybody, because this is the same team that scored six goals against Nasarawa United, but today we were struggling to score but we couldn’t. Football is dynamic and unpredictable. We have not been scoring goals in recent matches and it’s a subject of great concern. We have been doing our best to work on that during our training sessions and we hope to get it right soon enough”.

Captain Ubong Friday, Adam Yakubu, Seth Mayi, David Onovo and Samuel Amadi all had good scoring opportunities especially in the first half but were unable to direct their efforts into the back of the net.

The result means that Akwa United still stay 7th on the 20-team NPFL table with 45 points from 31 games and they will next travel to Owerri on Saturday to engage Heartland Football Club on Match-day 32.