As the 2021/2022 Nigeria Professional Football League enters match-day 4 on Sunday, Akwa United combative midfielder Ubong Essien has restated his team’s resolved to go for victory in all their games to ensure they defend their title at the end of the season.

Essien, who is an integral part of Coach Kennedy Boboye’s team this term has started all three games this season for the champions. The youngster told the club’s official website wwwakwaunitedfc.com that the team is in a good shape for Sunday’s clash in Lafia against Nasarawa United and added that they won’t be complacent.

“Last season was a very good football year for us at Akwa United and we believe that this year will be a better season for us. It’s our desire to continue with the fine form of last season.

“We have played three matches already this season and I can say that this campaign will be tough because as champions, every opponent will want to give us a fight and that is the reason we won’t leave anything to chance anytime we play.

When asked about Sundays game against Nasarawa United, the Welcome Time Football Academy product said “Our mission in Lafia is to win and improve our standing. We are unbeaten after three games and Nasarawa United are also undefeated after three games but since they are yet to win a match this season, we know what to expect and we won’t take anything for granted because it’s going to be a tough match and we are fully motivated and prepared for it.

“We are determined to go for the maximum points on Sunday and I’m sure that all of us will put up our best performances because we need to play well to ensure we win”. 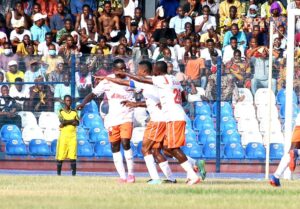 The hard-tackling midfielder who joined Akwa United in 2018 believes that the unity and understanding within the team is the driving force behind their commitment and drive for success.

With two wins and one draw in their opening three games, the champions are second on the log with seven points same as leaders Remo Stars who have superior goal difference.

In the last eight meetings between Nasarawa United and Akwa United in Lafia the, the home side have won four times while four of those matches ended in draws. Last season the Promise Keepers lost 2-1 but won the return leg in Uyo by the same margin on their way to lifting the NPFL trophy.

The crucial game will kick-off at 4pm on Sunday 2nd January 2022 at the Lafia Township Stadium.