With three wins and three draws in his six games since joining Akwa United, head coach Ayodeji Ayeni has revealed that the aim of his team is to fight for all available points in every game to ensure they end the season on a positive note.

Coach Ayeni in an exclusive interview with www.akwaunitedfc.com ahead of match-day 26 explained that the remaining 13 matches are very crucial and stressed that his boys will not leave anything to chance.

Akwa United are back at the Muhammadu Dikko stadium in Katsina where they were held to a goalless draw by Kano Pillars who used the venue as their adopted home ground on match-day 21.

On Sunday 1st May, 2022 the reigning Champions will engage hosts Katsina United at the same venue and coach Ayeni believes that his team is capable of getting a positive result. 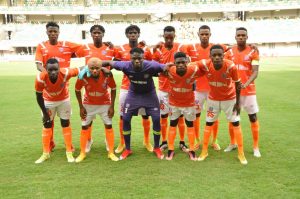 “The league is becoming very interesting and teams are doing their best to fight for points whether they are playing at home or away.

“My first six games in-charge of Akwa United have given me a great deal of knowledge about the capability and strength of my players and I’m confident that they can hold their own against any team in this league.

“The confidence level in the team is very high, the boys are putting in everything to be selected for matches and with the twenty selected for this crucial game against Katsina United, I’m optimistic we can get a positive result on Sunday.

Hosts Katsina United have scored 21 and conceded 27. They are 15th on the log with 27 points from 24 games, they have won eight games with two draws and two defeats in their 12 home fixtures thus far.

The champions have picked up two wins, five draws and five loses in their twelve away games so far this season, and they are 5th on the log with 39 points from 25 games, scored 27 while conceding 22 goals.

Akwa United came out on top in the reverse fixture on match-day 6 when they beat Katsina United 2-0 with goals from Charles Okafor and captain Ubong Friday at the Godswill Akpabio International Stadium in Uyo.

In the last eight fixtures between the two teams, Akwa United have recorded three victories, to Katsina United’s two wins while three of those encounters ended in draws.

In the last four meetings between Katsina United and Akwa United at the Muhammadu Dikko stadium, it ended two wins to the hosts and two draws.

Both teams will be going into the game with high spirit after winning their last outings. Akwa United defeated Lobi Stars 1-0 in Uyo, while Katsina came from behind to beat Abia Warriors 2-1 at the Muhammadu Dikko stadium.

The match will kickoff at four O’clock (4pm) in the afternoon Nigerian time.